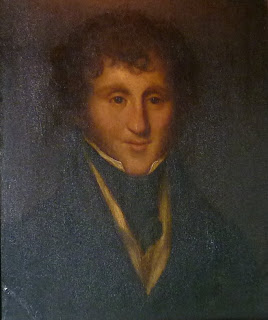 Visitors to The Blackden Trust will recognise this portrait.  He looks at you as you come in through the oak door into the middle room of the Old Medicine House. This, we have told our visitors, is Griselda Garner’s great–grandfather, Myer Salaman, who was the first Jewish Freeman of the City of London.  I have the framed strip of vellum that states, ‘Myer Salaman, of London, Fanmaker was admitted into the freedom aforesaid … on the 23rd day of February on the 45th Year of the reign of Queen VICTORIA, And in the Year of our Lord 1882 …’
’I wasn’t absolutely certain that the portrait was of Myer.  A few weeks ago, when I was looking for other information in the family tree, I spotted ‘Meyer Solomon, first Jewish Freeman of the City of London 1831’.   I was thoroughly confused.  Meyer was Myer’s uncle.  Which of these two was the rightful claimant to the honour of First Jewish Freeman of the City of London?    I asked, Richard Morris, the Chairman of Trustees and academic sleuth par excellence, for his help.  He found twenty-four Solomon and Salaman Freemen of the City of London.   Curiouser and curiouser.
An authority on 19th century costume and fashion advises that ‘the sitter's forward sweeping hairstyle and its length and the height of his collar and cravat point to the earlier part of the century’ - too early for him to be my great-grandfather, Myer, who wasn’t born until 1836.
If this is not Myer, could it be his father, Isaac Salaman?   There is a logical line of ownership of the portrait from Isaac to me.

Then Richard found a website called ‘Missing Portraits’ on which there was this portrait. 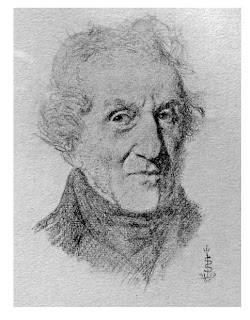 What Richard didn’t know was that it is a site created by a second cousin of mine, who like me, is one of Myer’s great-grandchildren.   I have never met my cousin, but we are now talking and he thinks that this portrait is of Isaac Solomon, who was Meyer’s brother and Myer’s father.   The hairstyle and fashion detail in this case suggest that the portrait was made at the end of Isaac’s life.  He died in 1872.  We know that the portrait was by the Pre-Raphaelite painter, Simeon Solomon, who was Meyer’s son, which makes him Isaac’s nephew and Myer’s cousin.
Are these two portraits of the same man?   Is this Isaac Salaman, my grandfather’s grandfather, the ostrich feather manufacturer, who made a fortune that the next three generations lived off and used philanthropically to support the arts?
I do hope so.  It would be fitting to have him presiding over our endeavours.

The portrait by Simeon Solomon is in a private collection.
For more information about the portraits and the artists go to:
http://www.resurgam.info/missingportraits/index.html
http://simeonsolomon.com/default.aspx
Posted by The Blackden Trust at 09:58