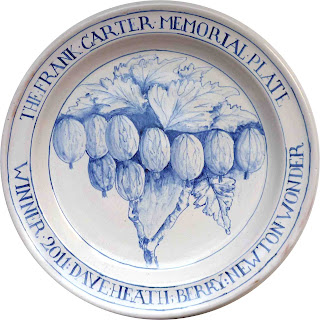 Although this is Dave Heath’s second Frank Carter Memorial Plate, it is unique; subtly different from the first in design.  Each one records the year, the name of the winner and the name of the winning berry and each plate is commissioned specially from John Hudson.
Frank Carter was a legendary grower in the second half of the twentieth century, who developed seventeen new cultivars; many of which are still winning shows decades after they were first shown.  All were grown on Blackden soil and many in this garden. 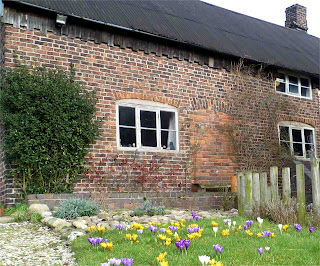 Frank was born in this house; probably in the downstairs room, as the midwife could not climb the stairs in the cottages.  You can see where the door to the cottage would have been.  The older gooseberry growers of Goostrey remember coming here when Frank was alive to gather his mother’s berries for the show. 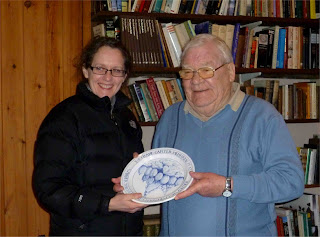 On Friday all the previous winners gathered for what has become the pattern of presentation, where last year’s winner presents this year’s winner with the plate.  Here Emma Williams is presenting Dave Heath with his plate.
Then we all have tea and cakes together and tales are told.Tales of wisdom and absurdity: of when to fertilise the trees and of how one novice grower sprayed his trees with diesel to deter wasps and killed the lot.  Wasps are the bane of growers. They say that a wasp landing on a ripe gooseberry can burst it and a burst berry cannot be shown. 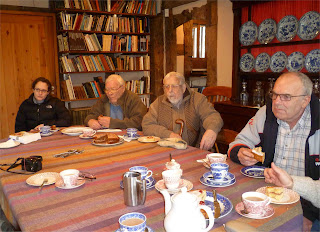 What the novice should have done was to put a saucer of diesel under each tree! ‘Not,’ said one of the growers, ‘as it makes much difference.’
Posted by The Blackden Trust at 12:40

Email ThisBlogThis!Share to TwitterShare to FacebookShare to Pinterest
Labels: Gooseberries