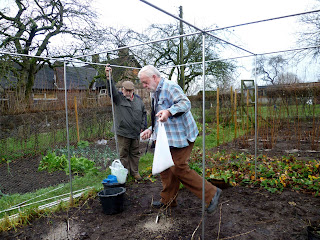 ‘Gooseberry godfathers’ is how I think of my two gooseberry-growing friends. Between us we hope to establish a living archive of Frank Carter’s prize-winning cultivars and to preserve the accumulated skill and wisdom of local veteran growers for future generations.  The culture of Gooseberry Shows that once dominated the lives of men in rural Cheshire is dying out; undermined by the First World War and further eroded by the Second World War.  But the godfathers are determined to keep it alive for as long as they can.  So they have given The Blackden Trust fourteen of the seventeen cultivars developed by Frank on Blackden soil in his lifetime and are searching out the remaining three.   They patiently show me each stage in the process of growing prize-winning berries and I record what they tell me, both in these pages and also on the website.  That way something will be saved. 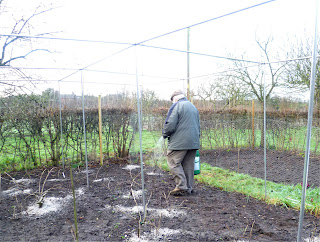 An essential part of the growing of gargantuan gooseberries is spraying with the right insecticides and fungicides at the right time.  This for me is the most difficult aspect of the whole procedure.  The rest of the garden is free from chemicals, but these prize-wining cultivars were developed for weight of gooseberry at a time when the negative effects of chemicals had not been recognised.   Unlike most modern varieties, these have little resistance to disease. 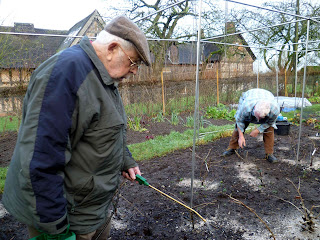 As one of our gooseberry godfathers sprays, the other trains the branches with specially made supports to get the optimum spacing both horizontally and laterally.

The berries need light and air to grow well. 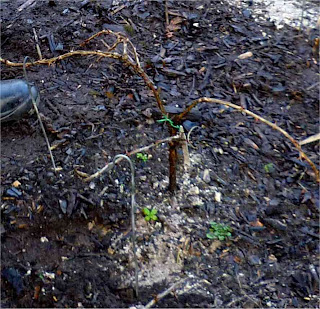 The trees sprayed and supported, the godfathers tell me that now is the time for the magic fertilizer to be sprinkled round the trees.  No gooseberry grower ever reveals what he feeds his gooseberries!   A supermarket bag is held out.  I am shown the contents: a small quantity of amorphous, granulated, grey matter.  What, I am asked, do I think it is?  I have no idea.  Is this a secret I have to earn the right to know?    A great laugh from both of my mentors.  ‘Dried seaweed!’   Dried seaweed maybe, but what else? I wonder. 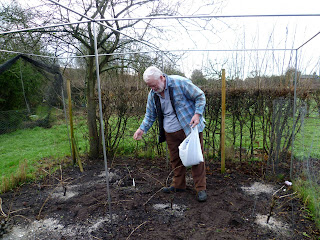 You can find out more about Frank Carter and his prize-winning gooseberries at
http://www.theblackdentrust.org.uk/projects_gooseberries.php
Posted by The Blackden Trust at 10:48