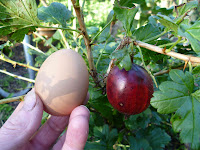 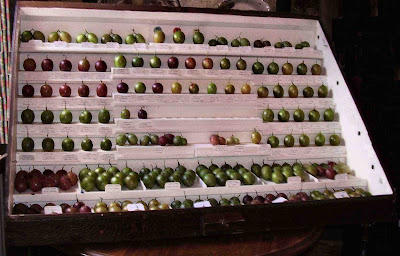 This is typical of the displays of prize winning gooseberries that can be found in the pubs where the shows take place in July and early August each year.  There are ten shows: one at Egton Bridge in Yorkshire; all the others in Cheshire and close to us at Goostrey, Over Peover, Swettenham, Marton, and other villages, all within a twelve miles radius.
As you can see, the gooseberries come in four colours: red, white, green and yellow; different varieties in each colour and each variety developed by the growers themselves.  A legendary grower, in the second half of the twentieth century, was Frank Carter, who developed seventeen new cultivars; many of which are still winning shows decades after they were first shown.  Gardeners will know that it takes many years to breed a new variety, and to discover whether a gooseberry tree, as the plants are called among growers, will have berries that are heavy enough to show takes even longer. 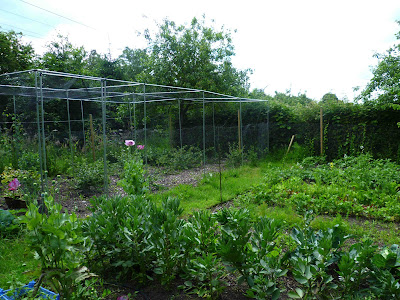 The trees are usually grown in pens covered by netting to protect the berries from birds, but ours are in a cage so that visitors to the Old Medicine House can see the cultivars developed by Frank Carter that growers from the Mid-Cheshire Gooseberry Societies have kindly donated to The BlackdenTrust.  Each grower has his own secret method, even ritual, to grow the monster berries. It is said that one advocates urine after a night on the beer; another, a bucket-full of rats; and one, somewhat enigmatically, ‘a little bit of weskit pocket’.  They may be secretive about their particular formula for success, but they are very generous in passing on the skills to novice growers, and to those that take them seriously.   I am very lucky to have been taken under the wing of two growers, who came a couple of weeks ago, to perform the first essential treatment of the trees to get decent sized berries: pruning 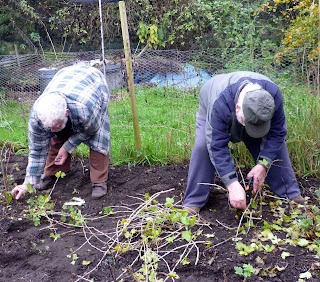 For the uninitiated, it is frightening.  A perfectly healthy, many branched, bushy tree is reduced to a fist of old wood with four or five white stalks of this year’s growth.  One of my friends pruned.  His aim was to create a tree that looked like ‘the spokes of a cartwheel’.  The other selected and trimmed the pruned twigs to make cuttings, which he stuck into the soil around the parent plant. 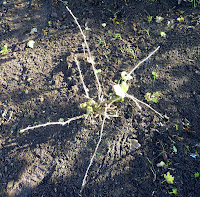 This denuded plant is now ready for winter.

Frank Carter was born here in Toad Hall, and grew all his gooseberries in Blackden; either in this garden or in the garden of No.4 Blackden Firs.  Some of the names he gave to his cultivars reflect what was important to him: Blackden Gem; Firbob; Roots; Blackden Firs; and Just Betty, named after his mother, Betty Carter. 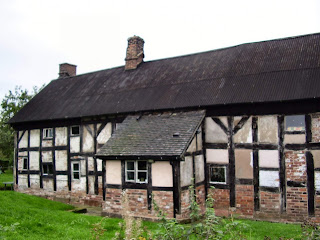 As well as establishing a collection of his cultivars to commemorate Frank’s achievements, The Blackden Trust commissions a Frank Carter Memorial Plate, each year, to be awarded to the grower of the heaviest berry shown at the Goostrey Gooseberry Show. 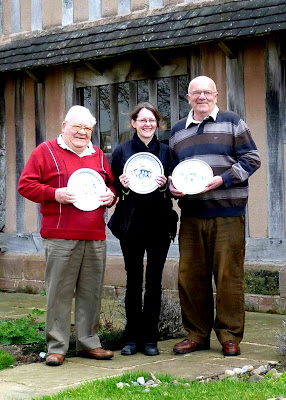 Here are the first three winners displaying their plates: Dave Heath 2009, Emma Williams 2010, the first woman to win at Goostrey, and Terry Price 2008.  Dave won again in 2011.  His plate is still being painted by the potter, John Hudson.  Each plate is unique in that it records the year, the name of the winner and the name of the winning berry. This is the inaugural plate. 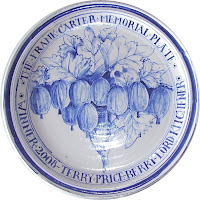 Posted by The Blackden Trust at 12:16