Wall Paintings and Other Decorations 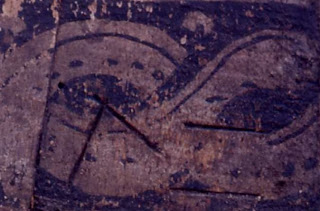 This fragment of wall painting was found in the middle downstairs room of the Old Medicine House in 1970. The room is still identified by its architectural name of Bay 2.  The painting was on the wall above the applied lath and plaster ceiling and below the floorboards of the room above.  It was only a fragment, but had it continued along the whole wall, we think it would have looked like the image below.

Below the scroll, in the plaster above the door head, we found a more elaborate pattern, so damaged by keying to make later plaster stick that I have not been able to reconstruct it. 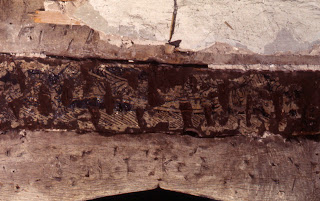 This black and white pattern ran across the plaster infill and the wooden uprights, so it is likely that it once covered the whole wall.  It is similar to the floral and geometric designs of Blackwork embroidery fashionable in the 16th century, where the embroidery can be seen on collars and cuffs in portraits painted by Hans Holbein.   When complete the wall must have been very striking and beautiful. 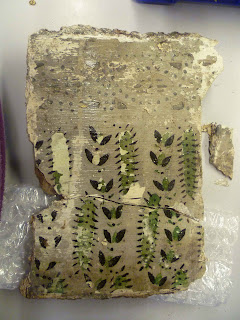 I find this design that was on the plaster of the Wing striking, but less pleasing.  It seems to be a combination of stencil and painted details. 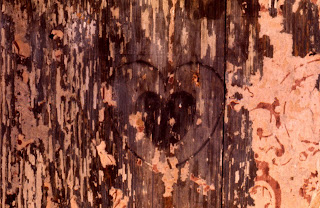 And hidden under layers of wall paper, was this double heart; drawn on a wooden partition in the room above Bay 2. It is the most moving and personal of all the interior decorations.   I would love to know who drew it and when.  Perhaps the documentary research that is waiting to be done will tell us.
Posted by The Blackden Trust at 11:31